Cruising the Inside Passage of Alaska

Cruising the Alaskan Inside Passage

The Inside Passage of Alaska used to puzzle the Western World. Local First Nation peoples spoke of a way to the north between the huge island of Vancouver and the mainland of Canada. It wasn’t until Captain Vancouver and his HMS Discovery crew found tides draining north that they realised their ambition and then key to the north. It was appropriate then in early September 2018 that we too boarded another smaller boat called MV Discovery to discover not the way to the north but fantastic wildlife that abounds here. Most cruises in this area are taken on very large boats carrying hundreds, perhaps even thousands, of passengers. These are somewhat disparagingly referred to by the locals as floating buffets full of the ‘overfed’ and ‘nearly dead’! Our boat had a crew of 4 and could accommodate 12 guests but because this was its last trip of the year had only 8 of us on board. The smaller size of our vessel [87 ft] meant that we were much closer to wildlife and that we could anchor in the quietest and most beautiful bays with no signs of habitation for miles. For us this was definitely the best way of cruising the Alaskan Inside Passage!

Our wish list for sightings cruising the Alaskan Inside Passage included whales, orca, grizzly bear and of course plenty of salmon. Little did we know that we would see so many and at such close quarters! Bird life here is quite limited but the mammals more than made up for it! We lost count of the number of humpback whales (Megaptera novaeangliae) we sighted and these were not a fluke or ‘blow’ on the far horizon! They were frequently alongside so that we got the full benefit of that fishy smelling breath! At one point we estimated that the whale pod that we were in counted between 50 and 60 and one of our party managed to get an image with no less than 27 ‘blows’ visible at once! We were very fortunate to have among our fellow guests a couple from Australia who regularly dived and filmed whales but they admitted that they had never seen such a concentration before. No days passed without whale sightings and on most occasions these were just off the bow! Orca (Orcinus orca) are less common but appeared on a day when the sea was mirror-like and the sky cloudless. The fact that they happily swam alongside so that we could watch them over the rail made for a magical experience! A large male with a huge dorsal fin kept his distance but females and calves happily surfaced and swam just metres from our boat. Cameras were working overtime to get the best pictures. But because the water was so still and clear it was perfect conditions for getting a bit of video on my still relatively new Fuji film X-T2. This was the first video I have taken so no pressure then! 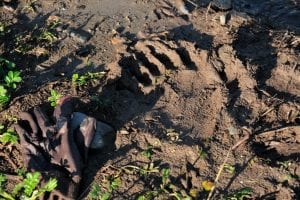 Fresh bear print with my gloves for scale A chilled grizzly appears less than 10 m away! As mentioned earlier, our relatively small boat enabled us to anchor in close. We often then went ashore using one of the two Boston whalers on board and then had a short hike. Hikes were short because you are quickly into dense virgin temperate rain forest with no paths. There was also the very real risk of meeting bears!

So instead of going in search of them we invariably sat by the side of a river where it entered the ocean and waited for the bears to come to us! This they did and at very close quarters! We were reassured by the crew that grizzly bears (Urcus arctos spp.) had never attacked a party of more than three. Fortunately it turned out that they were much more interested in catching salmon than us! The rivers were teaming with spawning salmon! We saw several bears at just 10 to 20 metres away but by calmly talking to them and behaving in a relaxed way they just went about their business of feeding up for the long winter ahead.

Cruising the Alaskan Inside Passage in such a small boat opened up other opportunities! Most of us also ventured close to the shore in kayaks. This gave us some much needed exercise [the food on board was superb!] but also the opportunity to view bears at close quarters as they frequented the stony beaches. Here and on the rivers they were surrounded by masses of gulls and bald eagles all eager to grab any salmon caught by bear but completely eaten. Of course it was the salmon that really interested the bears. We tried to catch them in the ocean with rod and line. But at this time of year they have only sex on their mind! They stop feeding and head for the rivers in which they began their lives. As they approach the fresh water flowing into the bays they dramatically change from sleek silver fish to rather ugly looking things.

We saw mostly pink or humpback salmon (Oncorhynchus gorbuscha). These become grotesque looking as they burn all their fat to get to the shallowest water to lay their eggs and fertilize them. The lower jaw grows long and hook-like and the body shape changes to a distinct humpback shape.

Of course, after spawning and if not eaten they are destined to die. Many dead fish littered both the rivers and the banks either half eaten by bear or just dead of exhaustion. Taking a leaf out of the bear’s book I stood in the river. I then reached down and easily caught a large fish by the tail! A close inspection showed just how damaged these fish become in their quest to procreate and produce the next generation.

Fishing on the Alaskan Inside Passage A 170 lb halibut is hauled to the surface!

Having failed to catch salmon in the conventional way we fished for halibut. Fortunately our captain and owner of this beautiful boat knew exactly where to go for them. With six rods in the water at once Uncle Ted was kept busy baiting rods and unhooking catches! We soon had five fine halibut between 15-20 lbs each. We caught many undersized ones that were of course returned to the water to get bigger.

Then my wife Felicity nearly went over the rail! Everyone thought that she must have hooked the bottom. But with rod bent almost double with a fighter definitely on the end! One of the crew Suzie came to her rescue and gradually they hauled in a very big fish indeed. This halibut was estimated to weigh 170 lbs and was the size of a door!

Apparently when this big they are all females and are full of eggs. So it is always best to return these to ensure plenty of fish in the future. Our Captain Ben released the fish and announced that this was the biggest caught this year! Pictures of the days catch were taken. Uncle Ted expertly filleted them for Alan, our chef, to make the freshest and tastiest fish and chips ever!

Halibut were not the only fish that we caught and ate. If you’ll count them as ‘fish’, traps were lowered overnight to provide the freshest Dungeness crab and prawns too!

Cabins on MV Discovery are not the most luxurious you’ll find but they are perfectly comfortable and provide privacy when cruising the Alaskan Inside Passage of Alaska. The point about this boat and its fantastically caring crew is that you can get really close to things! I’ve mentioned going ashore and all that opens up. But Ben expertly maneuvered the bow under a waterfall to collect more freshwater. We got really close to spectacular groaning glaciers as they calved more icebergs. And talking of ice… Suzie nonchalantly leaned over the side to ‘net’ thousand years old ice for our gins!

Can I recommend cruising the Alaskan Inside Passage on MV Discovery? As they say over there….Hell yes!

Save up and go! Details here.

It’s up there with the very best African safaris as far as I’m concerned!

Here’s a video of our trip that was filmed and edited by fellow guest Danyelle Harp. Thanks Dany!